Fårö Church is the only Gotland medieval church that has been rebuilt so much that it no longer has a medieval character. 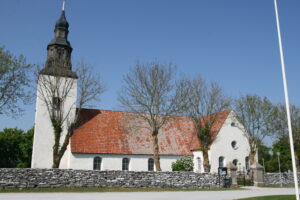 According to the Pope’s inauguration permit, the church is from 1324, but there has probably been a church from the 12th century in approximately the same place where today’s church is located.
The church has been renovated in stages and they started by changing the spire in the 18th century and at the same time the tower was also raised. In 1761, a window was opened on the north side and the same year the church was decorated with paintings by Magnus Möller. Those who remain today are those who adorn the pulpit and pews. The ceiling paintings were lost during the extension of the transept.
The choir was previously both lower and narrower, but it was demolished in the 1770s. 90 years later, the transept was built. In the transept is the altar from 1709 and the altarpiece of sandstone crowned by King Karl X’s name slate. To the left hangs a processional crucifix from the 14th century and the baptismal font in limestone is from the same period.

During seal hunts in the past, it happened that the ice cracked open and that the men then drifted with the ice floe out from land.
The most famous story is about a hunt in 1603 where 15 seal hunters drifted at sea and disappeared for 14 days.
Twelve of the men drifted ashore at the Svenska skären, three of the men had landed on Gotska Sandön.
During the adventurous journey, they had nothing but raw seal meat to eat, and they had to endure many sufferings in the cold and snowstorms.
In memory of the adventurous journey, they had a memorial plaque erected in the church 15 years later, on which they in Danish rhyme recounted the story.

Fårö Church is located in the middle of the island along the main road, about 8 km from the ferry.